Image from page 162 of “Principles of human physiology : with their chief applications to pathology, hygiene, and forensic medicine : especially designed for the use of students” (1843) – more Sharks goodness curated by www.SardineRunPE.co.za 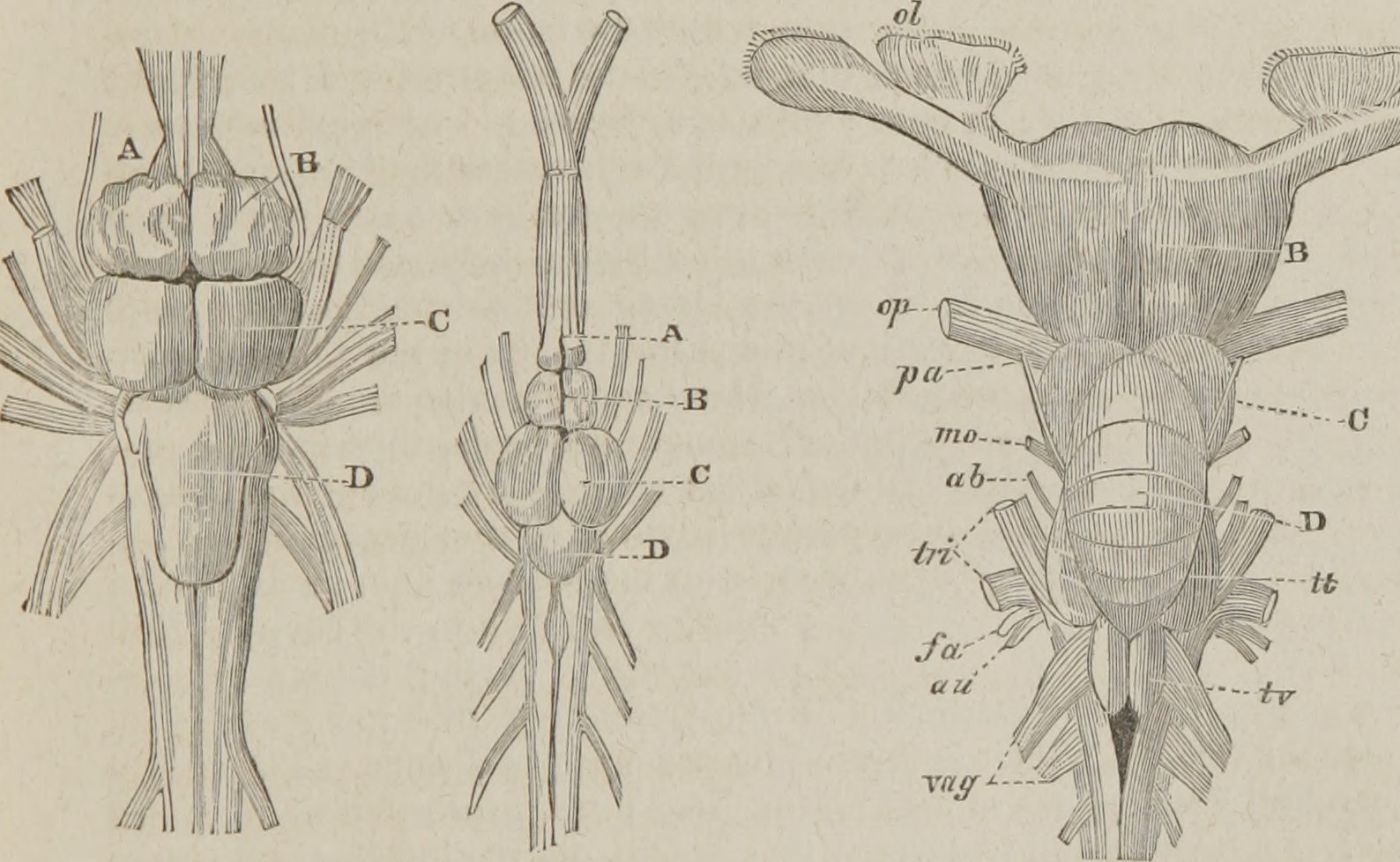 Text Appearing Before Image:
iately con-nected with the Optic nerve, which, in fact, terminates in tbem, and aretherefore to be considered (like the chief part of the cephalic masses of In-vertebrated animals) as Optic Ganglia. In front of these are the CerebralHemispheres, which are small, generally destitute of convolutions, andpossess no ventricle in their interior, except in the Sharks and Rays, inwhich they are much more highly developed than in the Osseous Fishes.Anterior to these is another pair of ganglionic enlargements, from which theOlfactory nerves arise; and these are, therefore, correctly designated as theOlfactive tubercles or ganglia. In some instances, these ganglia are notimmediately seated upon the prolonged spinal cord, but are connected withit by long peduncles; this is the case in the Sharks: and we are thus led toperceive the real nature of the portion of the trunk of the Olfactory nerve inMan, which lies within the cranium, and of its bulbous expansion on the Fig. 17. Pike. Cod. Fox-Shark.

Text Appearing After Image:
-A. Brains of Fishes, after Leuret, a, olfactive lobes or ganglia; b, cerebral hemispheres; c, optic lobes;r>, cerebellum; ol, olfactory nerve; op, optic nerve; pa, patheticus; mo, motor oculi; ab, abducens;tri, trifacial; fa, facial; au, auditory; vag, vagus; tt, tubercles or ganglia of the trifacial; tv, tuberclesof the vagus. Ethmoid bone. Besides these principal ganglionic enlargements, there areoften smaller ones, with which other nerves are connected. Thus, in theShark, we find a pair of tubercles of considerable size at the origin of theTrifacial nerves; and another pair, in most Fishes, at the roots of the Vagi.In some instances, too, distinct Auditory ganglia present themselves. 214. The Optic Lobes of Fishes have no analogy whatever with theThalami optici of Mammalia, the connection of which with the Optic nervesis apparent only. They are rather to be compared with the TuberculaQuadrio-emina, which are the real ganglia of the Optic nerve. Their ana-logy is not so complete