Image from page 400 of “The Tanganyika problem; an account of the researches undertaken concerning the existence of marine animals in Central Africa” (1903) – more Marine Life goodness curated by www.SardineRunPE.co.za 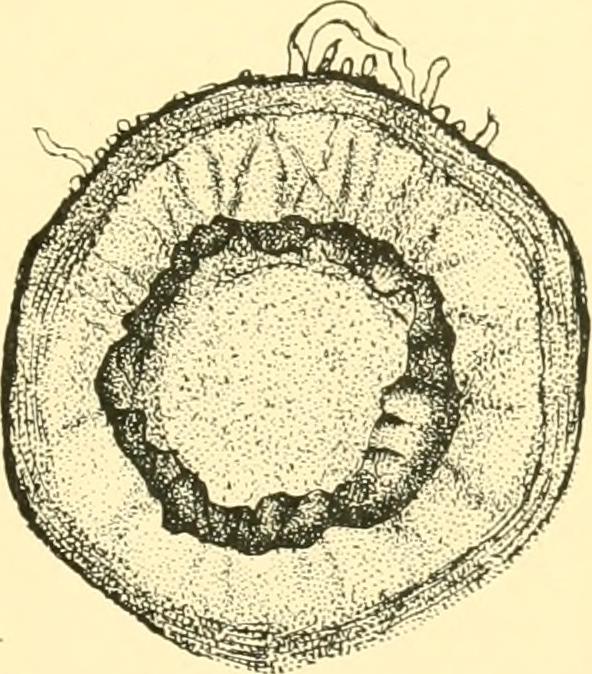 Text Appearing Before Image:
erm merely lines the walls of the shallow and widely-openmanubrial tube and a circular ditch round the bulging lens.In buds which have been produced asexually in this mannerit is found that, even before the above stage has beenreached, their manubriums are already studded with a newgeneration of buds, which in turn go through the sameprocess. There is, however, sometimes to be observed, especiallyin the solitary parental forms, an interesting modification of THE TANGANYIKA PROBLEM. 305 this process. Instead of the evaginations of the manubrialwall of the parent leading into single buds, these evagina-tions branch, so that a short string of buds are, as it were,attached to a hollow pipe, and before the manubriums ofthese buds have broken through, the string of vigorously-pulsating individuals becomes detached, and for a timefloats and swims about, presenting a singular analogy to aSiphonophoran (cf. Fig. 1). Eventually the individualbuds become constricted off from one another, and the

Text Appearing After Image:
Fig. 4.—Young asexual bud ofthe Tanganyika medusa X 10,showing the base of the gastriccavity still lined with endo-derm. final stages of their evolution seems to be the same asthat witnessed in the case of the sessile buds. Returning now to the consideration of the life-history ofLimnocnida, it has been seen that at the end of the wetseason, that is in March, there are a few adult medusae inthe lake which are only to be found with great difficulty.Such individuals begin about this time to bud, asexually, inthe manner I have just described, and the buds thus formed,themselves produce buds, this process being repeatedthrough many generations, so that in June and July the lake 20 3°6 THE TANGANYIKA PROBLEM. swarms with medusae; vast shoals of them, as I found,extending for miles and miles, and containing individuals ofall sizes, but nearly all of them presenting manubriumswhich were covered with hundreds of minute developingbuds. On the other hand, as the season advanced, moreand more