Image from page 402 of “The Tanganyika problem; an account of the researches undertaken concerning the existence of marine animals in Central Africa” (1903) – more Marine Life goodness curated by www.SardineRunPE.co.za 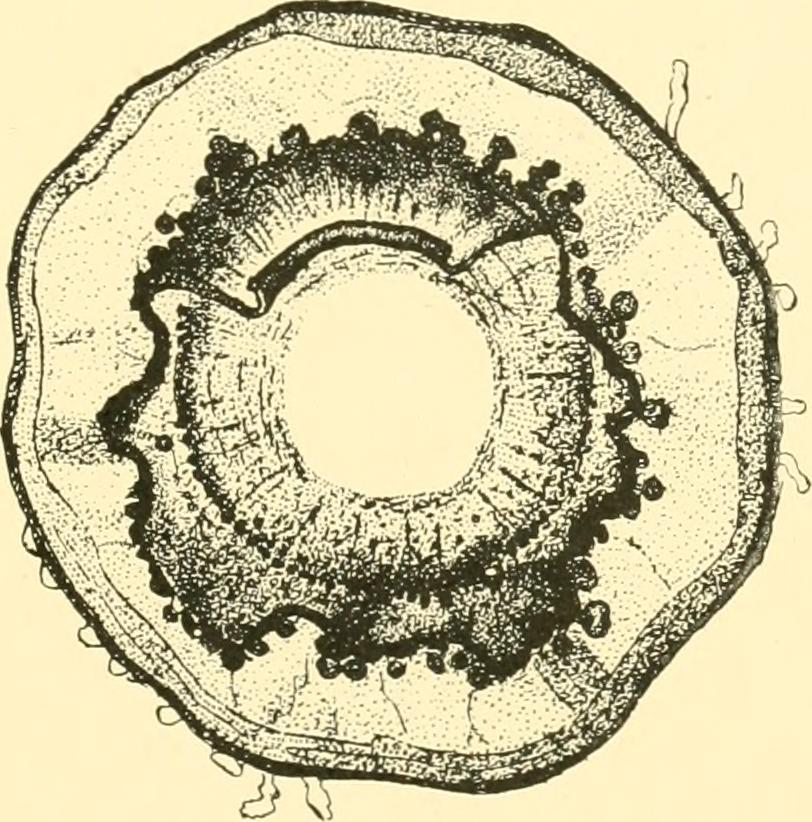 Text Appearing Before Image:
f the folded manubrium a group of a succeeding generationof asexual buds. very curious appearance indeed, many being almost, if notquite, destitute of manubrium. By an examination ofnumbers of individuals as the season advanced, I was soonled to the conclusion that this amanubriate condition wasproduced by the animals actually shedding the whole of theouter portion of the manubrium wall during the process ofcasting off their innumerable buds. Others again, duringthis period, were found with well-developed manubriums THE TANGANYIKA PROBLEM. 307 and had no buds. In such forms, however, sexual elementswere already being developed in the manubrium walls.Still later in the season the budding process came graduallyto an end, the lake swarmed with jelly fishes, and a largeproportion of them were still almost destitute of any manu-brium at all; but at the same time an increasing proportionwere becoming completely manubriated and sexual. Onmy first expedition to Tanganyika this was as far as I

Text Appearing After Image:
Fig. 6.—Still older asexual bud, showingsucceeding generation of asexual buds uponthe manubrium, a portion of which hasalready been shed, X Si- could carry the life cycle, but on the second I picked thestory up again, finding that during September and Octoberthe manubriated individuals gradually disappeared, themanubriums being gradually re-formed, while sexuallymature individuals now swarmed. The ova and spermatozoawere evacuated, and later I found numbers of small planulaeand small medusae which were growing rapidly ; but theseshowed no tendency to form buds during the autumn, andhad, without doubt, been formed from the fertilised ova ofthe sexual forms. There thus appears to be a distinctive 20* 308 THE TANGANYIKA PROBLEM. life cycle in Limnocnida, and this cycle is complete with-out any hydroid phase, in fact, no hydroid was ever foundin the lake, although I searched persistently for them.This being so, the many peculiarities which the life-cyclepresents are at once striking and