Image from page 87 of “General physiology; an outline of the science of life” (1899) – more Marine Life goodness curated by www.SardineRunPE.co.za 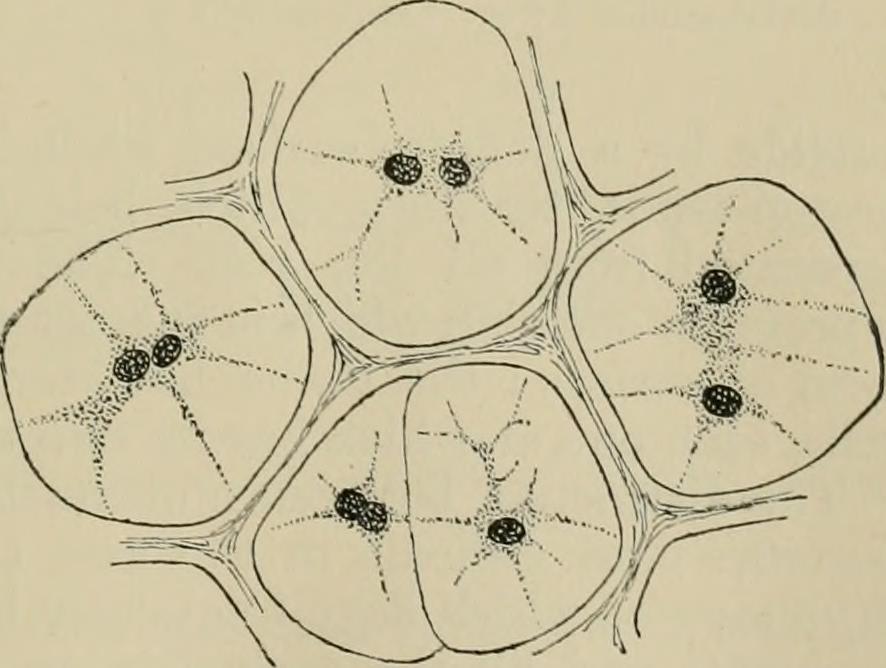 Text Appearing Before Image:
uality, tissues; and it might seem as if nosharper boundary exists than that between the single cell and thetissue, which consists of a number of similar cells, and as if itwould be very easy to distinguish the two stages of individualityfrom one another. Inreality this is not so.There are individual or-ganisms in which a distinc-tion, as to whether they areelementary organisms ortissues, does not readilyappear; and such cases,like many others in whichboundaries are to be estab-lished in nature, show thatthe fixing of sharp limitsand definitions must con-tain finally a more 01 less Fig. 12.—Cartilage; the cells contain two nuclei,arbitrary element, that, in-deed, all limits and definitions are only psychological helps towardknowledge. The transition-forms between typical cells and genuine tissuesare numerous. They consist of a unitary protoplasmic mass con-taining more than the one nucleus that is characteristic of thecell-type. Double-nucleated cells are found in many tissues, such

Text Appearing After Image:
72 GENERAL PHYSIOLOGY as cartilage (Fig. 12). Many epithelial cells (Fig. 13, a) containmore than two nuclei; and the large ciliate infusorian, Opalina(Fig. 13, h), which lives parasitically in the intestine of the frog,contains a considerably larger number. Forms with innumerablenuclei are to be found among the marine algse: e.g., in thethin lamellar protoplasmic layer of Caulerpa (Fig. 14), a giantcell of the shape and size of a leaf, there lies an immense numberof nuclei, all of which together with the protoplasm are moving ina constant slow stream between the cell-walls, i.e., the two surfacesof the leaf. All these organisms containing several nuclei can be separatedas multinucleate cells from multicellular tissues by the fact thatin the former the protoplasmic territory immediately surroundingthe individual nuclei is not sharply defined from the neighbouringprotoplasm, but together with all the rest of the protoplasm con-stitutes a unitary mass which appears as a whole shut off f