Image from page 88 of “The encyclopædia britannica; a dictionary of arts, sciences, literature and general information” (1910) – more Marine Life goodness curated by www.SardineRunPE.co.za 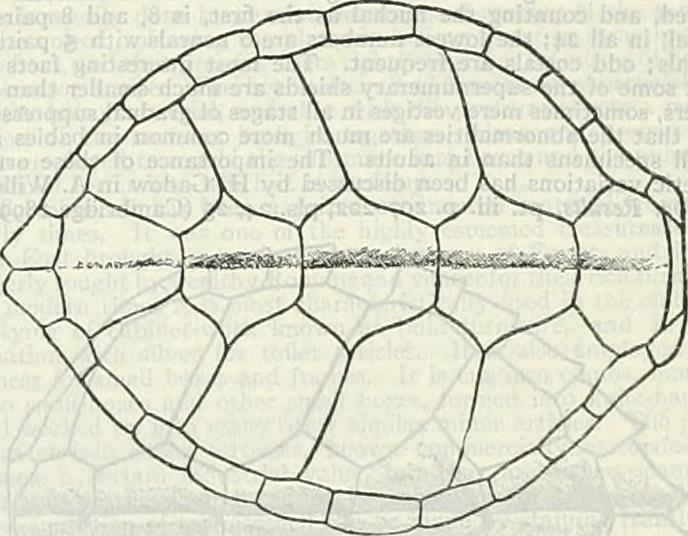 Text Appearing Before Image:
more than 7 in.in length. All the Galapagos species are remarkable for theircomparatively small head and the very long neck, which is muchlarger and more slender than that of the eastern species. Family 6. Chelonidae. Marine turtles, with only two recentgenera, with three widely distributed species. The limbs are paddle-shaped, with only one or two claws, and the shell is covered withhorny shields. The neck is short and incompletely retractile.The parietals, post-frontals, squamosals, quadrato-jugals, and jugalsare much expanded and form an additional or false roof over thetemporal region of the skull. Tne Chelonidae are a highly specialized offshoot of the Cr>ptodira,adapted to marine life. Fundamentally they agree most with theTestudinidae, and there is nothing primitive about them exceptthat they still possess complete series of inframarjrinal shields. Chelone, with only 4 pairs of costal shields, with 5 neurals anda broad nuchal. C. mydas s. viridis, the green or edible turtle,

Text Appearing After Image:
Fig. 5.—Creen Turtle {Chelone mydas). has, when adult, a nearly smooth shell. It-attains a length ofnearly 4 ft., and may then weigh more than three hundredweight.Their food consists of algae, and of Zoslera marina. Their captureforms a regular pursuit wherever they occur in any numbers.Comparatively few are caught in the open sea, others in stakednets, but the majority are intercepted at well-known periods andlocalities where they go ashore to deposit their eggs. These areround, with a parchment-like shell and buried in the sand, abovethe high-tide mark, as many as 100 to 250 being laid by one female.They are eagerly searched for and eaten. The famous turtle-soup is made not only of the meat and the fat, but also from thethick and gelatinous layer of subcutaneous tissue which lines theinside of the shell. Only the females are eaten; the males, recogniz-able by the longer tail, are rejected at the London market. Thisspecies inhabits the Atlantic, Indian and Pacific Oceans. C. imbric