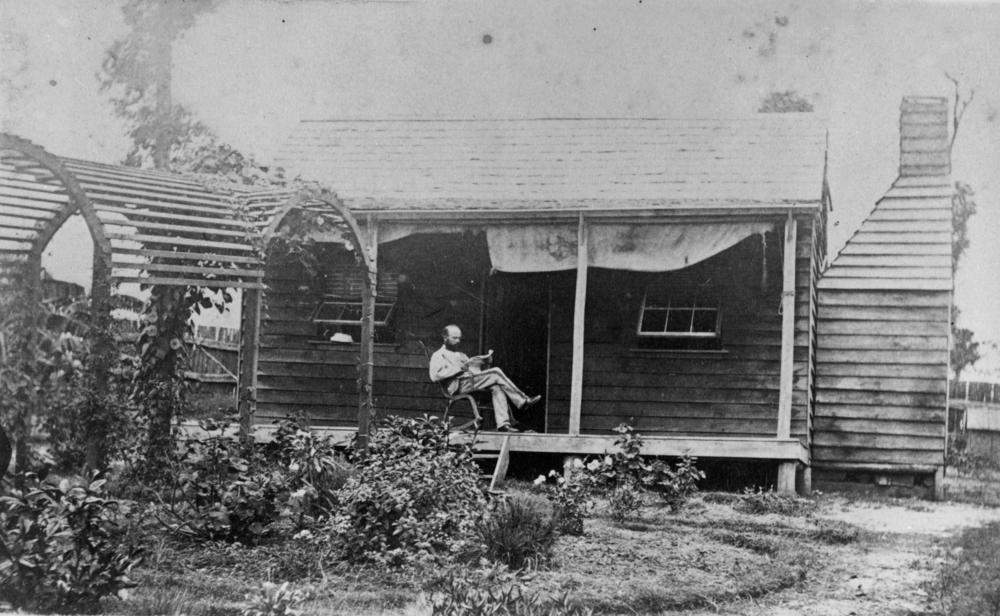 Description: This cottage garden has an arbour for climbing roses and various shrubs close to the house. The resident is sitting on the verandah reading the paper. The shade awnings are rolled up and the house’s windows are ajar.

Gympie is a city in south-eastern Queensland, situated on the Mary River about 162 kilometres north of Brisbane. Gympie is the centre of an important dairying and agricultural district. In the early days timber was a significant industry.

In 1867 James Nash found nuggets of gold in the bed of a dry gully in the district and a spectacular gold rush commenced. Gympie was originally called Nashville after the discoverer of the gold. In 1868 the name was altered to Gympie, an aboriginal term for the stinging trees found in the district. The discovery of gold proved the salvation of Queensland as, at that time, the colony was passing through financial difficulties. The largest mine was the Scottish Gympie which worked at levels from 650 to over 800 metres deep, and had underground roadways exceeding 50 kilometres in length. In 1909 fifty-one mining companies were operating. A huge nugget of pure gold, called the Curtis nugget was found in the Gympie district. It weighed about 18 kilogrammes. The gold petered out in the 1920’s. (Information taken from: The Australian Encyclopaedia and Explore Australia, 2003, Sydney Australia, Penguin Australia).

This photograph was taken by Edward H. Forster who worked in Maryborough and Gympie during the 1870’s. Forster called his first studio ‘The Panopticon’. His next studio was ‘The Australian & American Portrait Co.’ Forster won photography awards at the Gympie show in 1879. During the goldrush he worked as a travelling photographer but his main premises were in Adelaide Street, Maryborough. Many of these studies capture early Gympie family groups standing in front of their cottages. (Information taken from S. Barrie, Queenslanders Behind the Camera: Professional Photographers in Queensland, 1987). ca 1871

View this image at the State Library of Queensland: hdl.handle.net/10462/deriv/84275

You are free to use this image without permission. Please attribute State Library of Queensland.